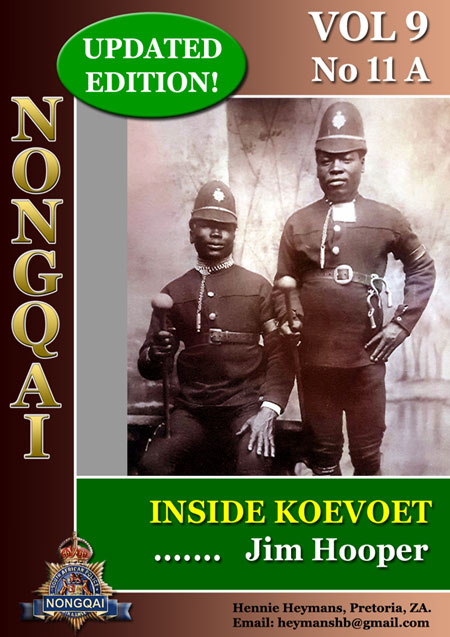 NONGQAI VOL 9 NO 11A (ISSUU)
Hennie Heymans is widely known for his interest in matters relating to the history of the police in South Africa. In Nongqai he indulges this passion. Over the years he has explored a wide range of themes relevant to police history both before and after the Union of South Africa was established in 1910.   Many of those themes, one would like to think, appeal to both police practitioners and researchers alike.  His research methods have been eclectic. Without much hesitation he combines bits and pieces of archival material, documentary sources, biographies and personal reminiscences from former police officials. As a keen photographer, Hennie also has a crisp eye for the use of visual images which capture police in the field.  Nongqai has succeeded in exploring – often in a kind of meandering way – some facets of the history of police and policing in our country.  In the absence of a clear conceptual or political framework, Nongqai leaves it up to the audience to interpret, accept or reject the representation of the police’s history thus assembled.

This edition of Nongqai titled Africans and policing brings a much-neglected issue to the fore, namely the role and function of African police in the police organisation. It is a topic which has received only scant attention in academic literature. Kenneth Grundy’s (1983) Soldiers without Politics: Blacks in the South African Armed Forces has, for example, explored race relations in the military but only touched upon some aspects of ‘non-whites’ in the South African Police. In his historical overview of policing in Black and Blue: Policing in South Africa, John Brewer (1994) again has attended to some aspects of race relations and racial politics.  Apart from such brief excursions, the administrative logistics and broader politics of race and police remain neglected. The topic of race and police is not easy to do justice to. Those classified as ‘not white’ were relegated to a subordinate status in South Africa.  How then did non-white persons clothed in police uniform negotiate their ambiguous status within the police organisation and within the broader South African society? As racial subordinates they were second-class citizens.  Clothed in the uniform of the police, however, they deployed coercive powers. We know little about the ambivalence and tensions experienced by African, Indian and Coloured police in the field of police action.

In this edition of Nongqai we are invited to engage the history of race and police and to embark on further enquiries.  This edition brings to life some of the police personnel, deployed in a variety of units, and in many policing situations and in disparate spaces. The image captured on the cover for example, is an intriguing one. Two proud and sturdy gentlemen stare straight at us. Their uniforms are a mix-and-match of elements that are both modern and traditional.  There is much of the British Empire to be found in the helmet and the well fitted top. There are bits of the traditional to be found in the bottom half. Knee length pants are rounded off with traditional beads wrapped around ankles. Armed with traditional knobkieries, African police constituted an important human resource who were deployed to enforce the rules of the system—pass laws, liquor laws, tax laws as those affected the disenfranchised masses.

Heymans’ exploration of African police is presented in chronological order. We page through critical periods of South African history – the late 1800s; the Union of South Africa, the years of depression; the Second World war; the establishment of the Apartheid state; the growth of popular resistance; the consolidation of the homeland police; the Border war, counter-insurgency, and the negotiated settlement of 1994.  Again, the author combined an eclectic mix of sources:  there is a fair bit of archival material, police documents, some newspaper reports interspersed with personal commentaries and many visual records.

Clearly this broad topic deserves much more substantive analysis. More focus, more depth, and more breadth are required to do justice to the complex history of race and police in South Africa.  We are far from understanding the finer details of how race impacted on police administration—both internally and externally.  We are yet to document and critically analyse group relations both within the police organisation and between the police and particular racial communities. We so often talk about the existence of a policing brotherhood, of policemen and women sharing a collective identity.  But how did race and the fine differentiations between the different population groupings affect the development of an overarching occupational solidarity?  In pursuit of that history we can only hope that others will be stimulated by this edition of Nongqai. There is a wealth of archival sources to be mined. There are thousands of police officials who experienced group politics inside the organisation and as well as outside in communities. We should not hesitate to collect those experiences – through interviews, written submissions and photographs - in a balanced and organised manner. Those interested in mapping how race and racial differentiation shaped the work of the South African Police and other auxiliary law enforcement agencies, sharpen their pencils, recharge their voice recorders and polish their cameras as they embark on a journey of discovery.