30 September 2018
NOTE: The updated 2nd edition was published on 24 October 2018. The link can be found near the bottom on this page, after the Introduction.
DOWNLOAD PDF
(File size: 10.6 MB)
or click / tap magazine cover to read on ISSUU 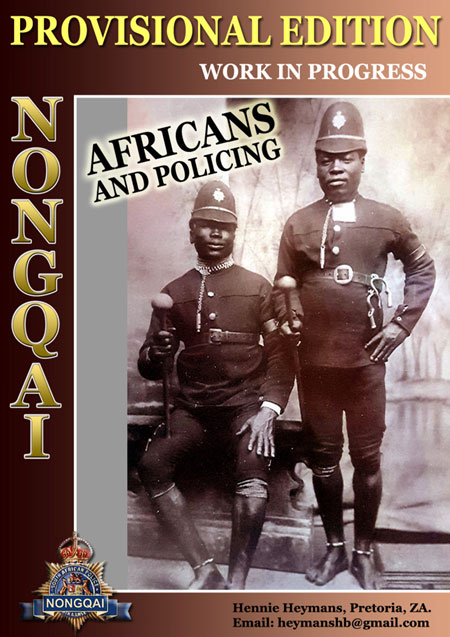 NONGQAI Vol 9 No 10A
Introduction
I have always been interested in the history of policing, especially in Southern Africa. This research began in the SAPS Museum where I obtained a copy of Maj. (Dr.) M van Wyk’s research entitled “Die Nie-Blanke Lede van die Suid-Afrikaanse Polisie” [The Non-White Members of the South African Police]. Historians and lay police historians are still in the beginning of their quest to obtain historical information about the role of African members in policing in Southern Africa. Their full role from auxiliary policemen to fully fledged policemen has to researched. In spite of many handicaps they faced, they were very good policemen. There are various reasons for this loyalty. Mostly because they were men of honour.

Research Method
Over a period of 60 years I built up a large library and read widely on policing. For a beginning, as far as this subject is concerned, I read all the Southern African police magazines I could lay my hands on. I first had to see what the official and semi-official i.r.o. African policemen viewpoint was. I then made scans of articles, Force Orders and photographs. I also asked colleagues to contribute on the subject and share their experiences related to African policemen.

I joined the SA Police nearly 55 years ago and I have an interest in the subject and I worked with Africans, I was temporally stationed at SAP Umlazi and spent a year in Soweto. I have always had an interest in all people, including African policemen. I have spoken to many and we have had many discussions especially on long night-duty shifts. I was fluent in isiZulu.

Building Blocks in History
This is a simplistic but panoramic view of the subject from 1652 until 1994. We see that almost every station in the two Boer Republics and the two British Colonies employed African police officers. In the Natal Police the African Police in the then Zululand was armed and dangerous!

Personal Point of view
I cannot defend “apartheid” - however I could see and understand the former NP-policy of so-called “separate development” and how the NP-government tried to get Africans to police their own communities in their own areas. As I said, I cannot defend the policy of apartheid, however I can only explain what happened in the police. I was a mere 17 years old when I joined the police in 1964. I can only give a testimony of what I saw and what happened. During my shift we tried to do our work of serving and protecting to the best of our ability as a multi-cultural police team.

Anglo Saxon Policing
When Britain took over the Cape from the Dutch, they kept the Roman Dutch Law but in 1840 changed the police system to a police model based on the British model.

As far as I have read it would appear as if the first Anglo Saxon form of policing took root in Durban in the British Colony of Natal. The Durban Borough Police existed from 1854 to 1935 when the Force became known as the Durban City Police. They were the oldest continuous police force in the RSA. They became the Durban Metropolitan Police and they finally became the eThekwini Metropolitan Police.

Training
Training for all, as far as I can gather in Southern Africa, was initially by in-service training in the Boer Republics and basic training for whites in Natal. Later basic training for all whites was introduced. Minimum requirements were a certain length, weight and good health. Mounted men, light weight and short, had to be good riders. Africans with little or no formal education joined the various police forces in Southern Africa. Some African policemen started as Labourer-Constables in the SA Police, they were responsible for cleaning the police camp, to act as grooms etc. After the Second World War training for all the other races was introduced. They then progressed to the ranks of Constable, Corporal and Sergeant. (There were various grades of sergeant rank.) Up to the 1960’s – 1970’s amongst white policemen the rank of Sergeant was quite a high rank. Later rank-inflation gradually took root among all races in the SA Police. African commissioned officers appeared on the scene during 1970 and by the 1990’s some reached General rank.

In the riot squad in the 1960’s in Durban the front line was African Constables armed with knobkieries and short assegais. We carried .303’s, revolvers and sten guns. We had no gas or other equipment.

Initially only whites served on the border, however when all races went to do border duty the official policy was to arm all races – even with automatic weapons. Later all policemen irrespective of race, were armed.

Apartheid
The following come to mind:

We see that the white policeman was always the senior member irrespective of a Non-white policeman’s rank. (In my view it reduced many African policemen to be auxiliary policemen.) Once again, the irony of history; it was usually the African sergeant that taught one when one arrived at the station fresh from the college. These old men were wise and many of us owe our lives to them. (I think of Sgt. Msibi of SAP Wentworth who once certainly save my life!)

Different uniforms were worn. On 31 May 1961 when the Republic of South Africa was founded the white policemen exchanged their khaki uniforms for blue and grey. Other races wore khaki uniforms. The khaki uniform later looked similar in fashion and cut to the blue and grey uniforms worn by whites. Whites had brass buttons and badges while the other races wore white metal badges and buttons. From December 1979 the policy changed and all police wore the blue and grey uniform. The NP-Government intensified training and sought men with at least Standard 6 school certificate. The NP-Government as we will see recruited many Africans and wanted Africans to police their own communities.

When it came to reality, apartheid took a backseat. On a station after hours we find sometimes only white Constables and an African sergeant. If bail had to be granted, even for a white man, the sergeant signed the bail documents. Yes, African policemen did on occasion arrest whites however a white constable would charge the white culprit. Think about rowdy sailors fighting and there are only two policemen available, one white and one African. Both policemen help and assist one another to arrest the trouble makers.

Care and share
I never partook of food, unless my direct colleagues also had something to eat. On a night shift we all shared bread and milk we received from the bakery and dairy respectively. If I bought fish & chips, a pie or even a cold drink I always shared with my van crew. We were good colleagues and if I was driving my African colleague took out his cigarettes and lit two cigarettes and would offer me one. Such a gesture speaks volumes for the good relationship and comradeship that existed then
in the SA Police.

Discrimination
White members initially had a “M” (“M” for mounted in English) or a “B” (“B” for berede in Afrikaans) behind their force numbers, e.g. No. 43630M Const. HB Heymans.

White members had a “F” (for Foot Police) and a “V” (“V” in Afrikaans for voetpolisie) behind their force Numbers. The same applied for other races. Later the Force became fully mechanised and the M/B and V/F was done away with.

A differentiation was also made in respect of the various races, and we initially found each rank had a race classification, e.g. “Bantu Constable”, “Coloured Sergeant” or “Indian Captain”.

Non-whites initially also started at No. 1 but later an instruction was issued that all Non-Whites had to have an extra “1” added to their Force Numbers. Ladies in the police received equal pay as their male counterparts however they had a (f) for female and in Afrikaans a (v) to denote their sex e.g. 9v) Lt. Smith.

Why this discrimination?
Later the race in front of the rank was done away with, however each race group received a pre-fix to their number i.e. “W” for whites, “S” for Africans, “A” for Asians (Indians) and “K” for so-called Coloureds. During the beginning of the 1990’s the police gradually moved away from all discriminatory measures.

African Women in the Police
Of all race groups African women were the last to be recruited and appointed into the South African Police. In the TVBC- and national States women were also recruited as policewomen.

Effects of the Revolutionary War on African Members
Many African Policemen became victims because their houses were attacked, they and/or their families were murdered, attacked. Scores of witnesses were killed or intimidated. Many policemen had to move from their homes to tented cities at safe havens. Certainly, the revolutionary onslaught took its toll. I saw their houses that were attacked and petrol-bombed. In Soweto it was my subjective opinion that a large number of African policemen had been “neutralised” by this onslaught.

Africans in the Union Defence Force and SA Defence Force
A few articles compiled by Peter Dickens is also included because all these articles give a good picture of the African in uniform and the obstacles he had to face.

A vote of Thanks
I wish to thank those “old” wise isiZulu sergeants who taught so many young white members (including the writer) to do police work. I would also neglect my duty if I don’t thank them. Many times, they saved our lives. They had a tough time as African Policemen, however they were loyal, disciplined and knew police work. In the final analysis we were comrades and policemen.

Hennie Heymans
30 September 2018
NOTE:
The above introduction was sourced from NONGQAI Vol 9 No 10A, published on ISSUU
Work in Progress - African Police and Servicemen
Published on Sep 30, 2018
UPDATED 2ND EDITION
Published on Oct 24, 2018
Please share your info and photos with us.
(All submissions will be fully credited.)
Send eMail
Nongqai Editor