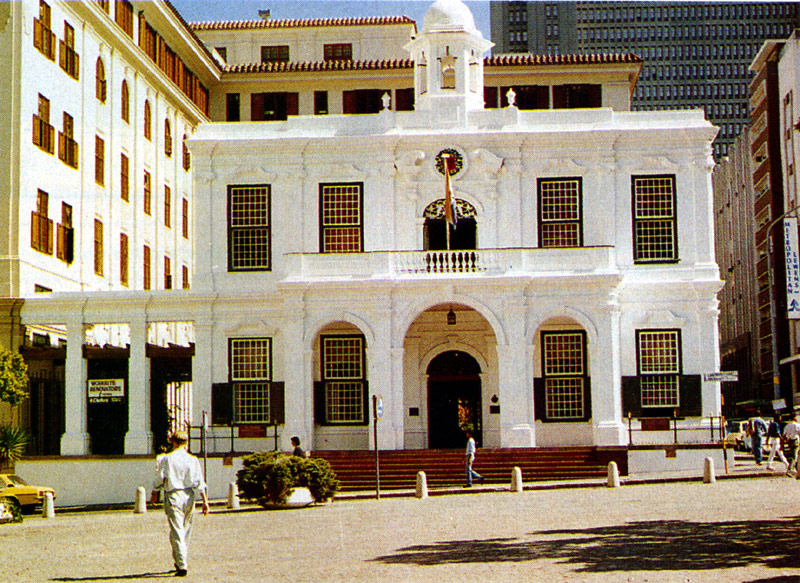 This majestic old museum was once the police headquarters during the reign of the Dutch East India Company.
This building stands as a proud example of eighteenth century architecture and symbolises the development of local government in Cape Town.

When free colonists were created, the Company granted them representation in the Council of Justice: at first, by one representative, later increased to three and eventually to six. In the course of time, however, as Cape Town developed, the Company wished these Burgher Councillors to play a part in the local government and considered that the streets should be patrolled at night by a burgher watch under the command of a sergeant and a corporal. For many years the Burgher Council met in the house of the oldest burgher councillor, while the Watch assembled every evening at the “Orphanage” or at the slaughterhouse on the foreshore before going on patrol of the streets. The danger of fire created the need for fire-fighting services and led to the establishment of a fire brigade with its main fire station next to Greenmarket Square. 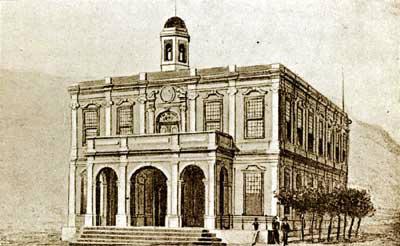 Het Burger Wachthuis, Kaapstad.
​The increased activities of the local authority necessitated a proper headquarters for the Burgher Councillors and the Burgher Watch. Consequently a vacant erf facing Greenmarket Square was acquired early in the eighteenth century and the first Burgher Watch House was built on this site in about 1716. It was designed in the style of an ordinary burgher’s dwelling, but, in view of the rapid expansion of Cape Town under the benevolent administration of Ryk Tulbagh, it was replaced by the present building. The foundation stone was laid on 18th November 1755. The old Wachthuis was demolished in 1755, and on the 18th of November of that year the foundation stone of the new Town and Watch House was laid by Barendt Artoijs, a member of the High Court of Justice. The silver trowel he used on that occasion, engraved with his coat-of-arms and an inscription, is preserved in the City Hall?. Part of the building was occupied in August 1756, and the remainder was completed in 1761. It housed the Burgher Council as well as being the headquarters of the Burgher Watch, and, later, meetings of the Burgher Senate were held there. Situated on the corner of present-day Burg and Longmarket Streets, and known as the Old Town House, it was restored and renovated in 1916 to house the famous Michaelis Collection of seventeenth century Dutch masters.

This stately building enhanced the status of the town. It exhibits an imaginative but somewhat florid Baroque style. The front elevation is particularly striking.

An arched entrance reached by steps of Batavian bricks and surmounted by an ornamental balustrade, with four large vases gave access to the building. The facade of the upper storey was broken by six pilasters, above which there was an openwork parapet, with an urn in line with each pilaster. This front elevation’ was somewhat altered during the early years of the nineteenth century. On 3rd July 1804, Batavian Commissioner-General J. A. de Mist presented a coat of arms to Cape Town. He decreed that it should be erected “on the outer walls”. This was done at the cost of removing a representation of the Figure of Justice with a sword in her right hand and a pair of scales in her left, together with the surrounding baroque ornamentation from their positions immediately above the balcony door and below the parapet. These were now replaced by a plaster-of-paris representation of the coat of arms. About four years later Herman Schutte added the little bell-tower, which is now such a striking feature of the building, The upper balustrade was removed at the same time, and at a later stage the lower parapet was replaced by a balcony with railings. These last alterations probably had some connection with the earthquakes of 1809 and 1811, for the traveller, zoologist and botanist W. J. Burchell records that many of the ornamental urns were dislodged by the seismic disturbances.
For more than a hundred years this building was the administrative centre of Cape Town. The three Burgher Councillors met in the hall on the upper floor. The first British occupation saw the Burgher Council converted into a true municipal body, the Burgher Senate, and the Burgher Watch House increasingly served the function of a Town House. During the Batavian regime the duties of the Burgher Senate, as distinct from the administration of the Colony, were clearly defined by J. A. de Mist. Not only did the Burgher Senate meet here, but tradition has itthat public announcements were made from the balcony which also served as a rostrum from which meetings on the square below could be addressed. Such occasions were announced by the ringing of a bell in the tower.

The Burgher Senate was finally abolished in 1828 and for the next eleven years the central government itself took over the administration of municipal affairs.

The old Burgher Watch House continued to watch over the development of the city until 1905 when anew City Hall was built facing the Parade. It now became known as the “Old” Town House and stood unused for a time.

Fortunately Sir Max Michaelis decided to donate his large collection of works of art to the people of South Africa and the City authorities agreed to make the “Old” Town House available for housing it. The central government undertook to convert the interior to satisfy the requirements of an art gallery. The work was entrusted to the architect J. F. Solomon under whose supervision “the barn like shell, cumbered with mean rooms and stairways, disfigured with boarded ceilings and littered with unsightly partitions, was transformed into an architectural gem. The new art gallery was inaugurated on 8th May 1917.