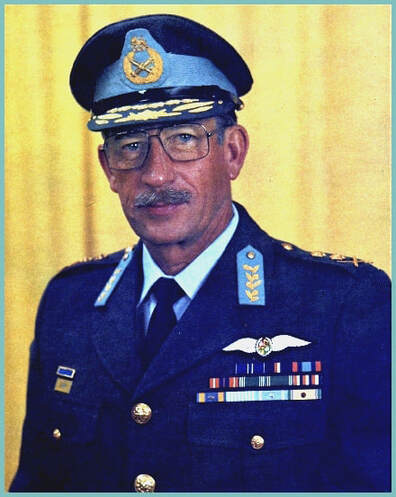 CAREER
He attended Grey College, Bloemfontein, Military College in 1948 and joined the SAAF in 1950. After qualifying as a pilot he served in Korea with 2 Squadron SAAF. He was forced to bale out over enemy territory and was a POW for 23 months.

Released in September 1953, he was posted to 1 Squadron till January 1957. Then he spent two years as an instructor at Central Flying Service Dunnottar before being appointed as a pilot attack instructor at the Air Operations School.

In 1964 he spent time in England converting to Canberra light bombers and on his return served as a pilot at 12 (Canberra) Squadron at Waterkloof Air Force Base.

In December 1967 he returned to 2 Squadron as commanding officer. Eighteen months later he was appointed commandant flying at Air Force Base Pietersburg and after that senior staff officer (air) of the Joint Combat Forces.

His career took an unusual turn when he converted to helicopters and became officer commanding 17 Squadron at Air Force Base Waterkloof.

His son, Lieutenant Michael Earp, was a helicopter pilot who was killed in the Border War on 5 January 1982.
​
​In 2011 Brigadier Hennie Heymans (Retired SA Police Officer), interviewed Lt. Genl. D.J. Earp. The interview was held when Lt. Genl. Earp was already retired. The purpose of the interview was to perform research for Jonathan Pittaway's book, "KOEVOET: The Men Speak". ​It was during this interview that Lt. Genl. Earp handed Brigadier Heymans a handwritten article that he compiled. The article is valuable proof of Lt. Genl. Earp's optimistic attitude towards the SA Police and the fact that as head of the SAAF he also supported Koevoet.
Scroll down to view the documents.
HISTORICAL
HISTORICAL
DOCUMENTS