FROM RATTLE WATCH TO BATONS

This article is a reproduction of a historically significant journalistic report, originally published in The Nongqai, Vol. XXIX No. 8, August 1938 p 792 & 794.

THE NONGQAI VOL. XXIX [AUGUST 1938] p 792
CONTRIBUTED BY OLIVER JENKINS
​
Incidents in our Police History Revealed by Old Records.
WHO REMEMBERS THE “KLIPDRIFT POLICE Force,” an elaborate and picturesque organisation formed “all on their own” by a diamond digging community in 1870?

This is one of the oddities in the evolution of the Police in South Africa which I recently discovered in the faded records of the Cape Town archives. It led me to turn back the pages of time to the early years of the last century and examine a few of the “ups and downs” in the history of our Force. This is what I found:

“The Watchmen being informed of any disturbance or evil design, they shall immediately spring their rattles and loudly call out murder, thieves, or the like.”

This was one of the standing orders issued to the Burgher Wardmasters – the predecessors of the blue-uniformed police – in Cape Town in 1817, two years after the Battle of Waterloo and during the governorship of Lord Charles Somerset.

Before these Wardmasters were appointed, about the year 1790, there had for many years been a rudimentary system of patrolling the streets at night by burgher watchmen, but the Wardmasters (referred to indiscriminately by writers as Police or Aldermen) were the actual forerunners of the “Force” as now existing.

The Policeman, therefore, as we know him today armed only with his baton, belongs to a profession which, comparatively speaking, is of very modern origin. A little over 100 years ago the well-informed and well-disciplined Constable of today was almost undreamed of.

The duties of the old burgher Wardmaster in the Mother City included jobs which would seem strange to the modern Policeman. He had to enforce cleanliness in the streets and in public places, maintain order and give directions at fires. Each man so appointed was required to have a board, with his rank “Wijkmeester” painted on it, affixed to his house.
Before going on duty in the evening the wardmasters were inspected, armed with swords and given rattles (made of boxwood and very noisy) and lighted lanterns. They wore felt hats with wide brims, coats of long skirting and knee-breeches. Each was in his ward by ten o’clock and paraded up and down during the night, springing his rattle and making outcry in case of need.

All watchmen were exempted from burgher taxes and received a salary of 25 rixdollars a month.

In 1828 the first step was taken towards forming a police force when an Ordinance was promulgated establishing the police as an executive body in Cape Town district. Mr. W.C. van Ryneveld was appointed Superintendent. It was approximately at this time also that the London police force came into existence.

Compared with the modern body however Cape Town’s police of those early days was a very poor affair. Under the Superintendent there were three under-sheriffs or Gaolers at an annual salary of about £40. The Constables received only about £23 per annum.

The service was therefore disliked and looked down upon as a degredation. The “Dienaars,” dissatisfied with their lot, became drunken. When they were unnecessarily severe upon Hottentots or slaves, they received a flogging at the hands of their brother Constables.

Each Constable carried (in addition to his sword) a staff as an emblem of his authority, and was allowed to carry a pistol when in pursuit of or conducting a prisoner.

The aiming of the police with swords remained a vexed question for some years, and the matter came to a head in 1839 when – as the Gazette reported: “During a brawl or disturbance on the Parade, a young man named Roberts was wounded in the thigh with a sword by one of the police and speedily bled to death.”

The upshot was that in 1840 the Government remodelled the police “under Mr. Inspector King of London” and a new era was inaugurated. 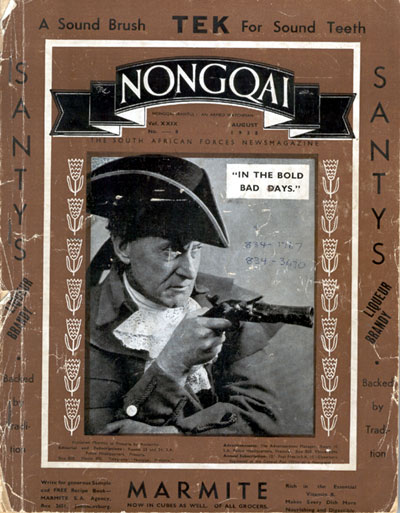 THE NONGQAI COVER - VOL. XXIX [AUGUST 1938]
The next considerable step was made in 1850 when rural police were formed in the frontier districts of the Cape. Before this the Cape Mounted Riflemen had carried on this police work more or less spasmodically and roughly.

Port Elizabeth, which, beginning as one of the worst conducted towns in South Africa, eventually becoming one of the best, did not move in the matter of a local police force until 1855 when the inhabitants heroically agreed to a rate of 3d. in the £ rental to secure an efficient body. The P.E. force however had many vicissitudes and re-organisations as the pay was very low and the best men left for better positions.

The lack in country districts of reliable or any police was sometimes made good by swearing in Special Constables. Thus in 1856 at usually quiet and law-abiding Stellenbosch the paper reported that there were “boisterous meetings” in the village and that Special Constables had to be sworn in “to keep within bounds the opposition to the Burgher Bill.”

In 1860 a blue cloth uniform was adopted for town police and helmets of grey cloth with V.R. and wreath on the front were added in 1869. Thus the South African “Bobby” attained the dignity and bearing which go with a smart uniform, but in one case it appears to have led to excessive zeal.

According to the “Cape Argus” the police had been ordered to keep a clear space in front of the entrance to a horse show in Darling Street, Cape Town. “Policeman No. 5 took it on himself to stop the traffic altogether.  Mr. Isemenger, the wagonmaker, declined to be stopped and walked on, whereat No. 5 ran after him, seized him by the collar and marched him off to the police station. The case came on at once before Baron Lorentz, who besides fining the policeman £1 for assault had him dismissed from the Force” – rather a “raw deal” for No. 5.

The following year (1861) there was a “spot of bother” at Fort Beaufort which a local press correspondent described as follows: “Four coloured prisoners broke away from their police guard here yesterday and robbed the village last night. No one would go in pursuit of them because the Government remuneration is too low. The Chief Constable appears to be able to do nothing.”

The haphazard way in which police “forces” appeared like mushrooms in those days and as quickly faded away is well illustrated by the “Klipdrift Police” mentioned earlier in this article. In October, 1870, the Mutual Protection Association of the Klipdrift diamond digging community formed a corps of 30 men under one Inspector at £200 a year, the Sergeants receiving £10 a month and the Privates 5s. a day. Uniforms were provided and the little Force did its job well for some time until eventually the attractions of the diggings proved too strong and most of the men got jobs at De Beers and New Rush.

Two other little “incidents” in the story of our Police which I discovered during my search among the old records were a strike by the Cape Town Police in 1881 and the “resignation in a body” by the Mossel Bay Police later in the same year. In both cases, however, a satisfactory settlement was reached within a short time.

Finally, here is a little story of how a Bloemfontein “Bobby” got himself into trouble in the early eighties: Giving evidence before the local Magistrate in a charge of drunkenness against a respectable citizen of the town, he frankly admitted that he was drunk himself when he arrested the citizen, but he thought the man was drunk also so “ran him in” and locked him up for the night.

That was the last arrest he made!
A special thank you to Ina de Beer for typing this article, word-for-word from the original Nongqai, dated August 1938 (Vol. XXXIX No. 8) p 792 & 794.
SHARE THIS PAGE
HISTORICAL