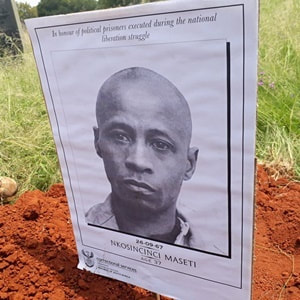 The remains of nine Pan Africanist Congress members, who were hanged between 1963 to 1967, were exhumed. (News24)
​​​Tears as more PAC political prisoner remains exhumed
2018-03-07

Pretoria - A woman wept bitterly as she entered the execution room at the Kgosi Mampuru prison gallows, where political prisoners were hanged decades ago, before they were buried in unmarked graves.

Nombulele Mavis Mgweba held a white tissue in her hands and wiped her face as a correctional services official demonstrated how prisoners were executed.

Her uncle, McDonald Mgweba, a member of the Pan Africanist Congress' armed wing Poqo, was executed at the age of 30.

'We need to be strong'

"I never understood why they hanged them. It's better if they shot them instead of hanging them. That's why I [am] not happy about this," she said.

She said her family held a funeral without his remains in 1987.

"Now we have the remains, but it's too late for us. Most of the relatives are dead...it is only kids now."

WATCH: 'Now we can get closure' - PAC after executed members' remains exhumed

On Wednesday morning, families of those who were hanged were taken on a visit to the prison gallows to remember their loved ones, before heading to the Rebecca Street cemetery in Pretoria West.

The initiative was conducted by the Truth and Reconciliation Commission (TRC) unit of the Department of Justice and Constitutional Development, together with the Missing Persons Task Team (MPTT) of the National Prosecuting Authority.

They exhumed the remains of nine members of the Pan Africanist Congress’ armed wing Poqo, who were hanged between 1963 to 1967.

Eight PAC members were exhumed at Mamelodi West cemetery on Tuesday and one was exhumed on Wednesday at the Rebecca Street cemetery.

The project was launched by Minister of Justice Michael Masutha in 2016.

According to the department, the bodies of the hanged prisoners remained the property of the apartheid state and their families were denied the opportunity to bury them.

The department said in a statement that the nine PAC members who were exhumed this week were all part of an intense political protest in Paarl in 1962. 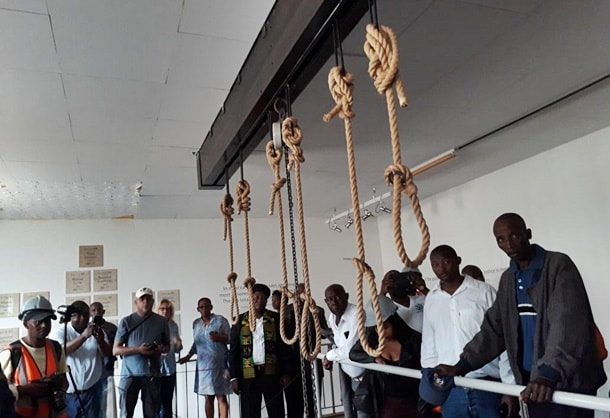 The execution room at the Kgosi Mampuru prison gallows. (News24)
​During this time, there was a series of campaigns and attacks on suspected informers and white residents, it said.

"The period of protest culminated in a mass night time march on the white town of Paarl in November 1962 in which two whites were killed. In all, nine persons were killed by the PAC protesters that year and five PAC protesters were shot dead by police."

PAC President Narius Moloto, who was at the cemetery on Wednesday afternoon, told News24 that they were grateful because their heroes were being exhumed.

"[The] PAC has the most hanged people during the course of the struggle. Today the exhumation bears witness to that," he said.

"It is a highly-emotional event because these are the people who fought gallantly for our struggle.

"Today people think this liberation was cheap, free and easy but, by witnessing what we are witnessing, it confirms that people contributed with their lives," he added.

Once the bodies are positively identified they will be given to their families for a dignified burial.

Article and images sourced from: News24